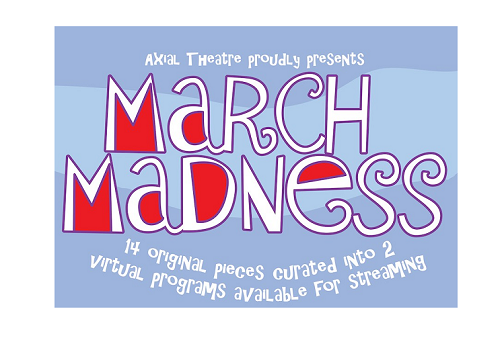 MARCH MADNESS Is Virtual Showcase of Monologues and

One-Acts Celebrating the Shapes and Shades of Love

VIRTUAL – Axial Theatre has announced the line-up of short plays and monologues for March Madness, an all-virtual seasonal tribute to love and lovers.

The 13 original one-acts and monologues, presented as two separate bills of plays, will probe the depths of joy, despair and everything in-between that follows when Cupid’s arrows strike – or miss their mark.

The first bill of plays, collectively themed “It Takes Two, Baby” (Program A), debuts 8 pm on Friday, March 19, and will be available until March 26.

The second bill, themed “I’ve Gotta Be Me” (Program B), debuts 8 pm on Friday, March 26, and will be available for streaming through Thursday, April 1, 2021.

All tickets can be purchased at axialtheatre.org for $20, which entitles the ticket holder to watch all 13 plays on both of the bills.

The two bills are …

Available for streaming March 19-25
“It Takes Two, Baby” (Program A)

Nine Months Ago
An earnest and kind-hearted middle-aged man, looking for his soul mate and a family, is on a first date with an off-the-wall woman … who is very pregnant. By Nick DeSimone, directed by Lori Lowe. Mel – Mike Roche, Cynthia – Lucy Lavely, Waiter – Gary Geller.

I’ll Get the Wine
A married couple looking to spice up their love life turns to Oprah for some tips. By Carol Mark, directed by David Fritsch. Sara – Jaime Babbit, Jim – Chris McLaughlin.

The Other Other Man
A distraught husband accuses his neighbor of infidelity only to find they have something important in common. By Carol Mark, directed by Catherine Banks. Colin – David Cohen, Mike – Harry J. Copley.

Heartbreak on Board
Peggy Sue’s passions for cars, a special guy, and poetry have collided. By Linda Delaney, directed by Catherine Banks. Peggy Sue – Sabrina Fuchs.

Nothing Happened
Can a bruised couple survive a transgression – or will misdeeds and memories rule the day? By Evelyn Mertens, directed by Virginia Reynolds. Paul – Dan Walworth, Lexi – Marilyn Collazo.

Excerpt from the award-winning Off-Broadway solo show Wasbian, a shameless exploration of what it is to search for love — and sex. By Susan Ward, directed by Laura Gardner. Susan Ward.

Panty Wear
Leonard has a strange fetish. Once his girlfriend Jilly gets a whiff, she quickly noses around, following the scent to discover what stinks—or doesn’t! Written and directed by Wayne Paul Mattingly, co-directed by Quinn Warren. Leonard – Matt Austin, Jilly – Heather Haneman.

Stiff Upper Lip
Is heaven what you make it? Do appearances count when you go to meet your maker? Walt and Wendy explore their options for the hereafter while still in the here and now. By James Balestrieri, directed by Virginia Reynolds.

When love is love, it works in mysterious ways, and can last longer than a lifetime. Based on a true story. By Virginia Reynolds, directed by Rachel Jones. Virginia – Catherine Banks, Louise – Sandy Rooney.