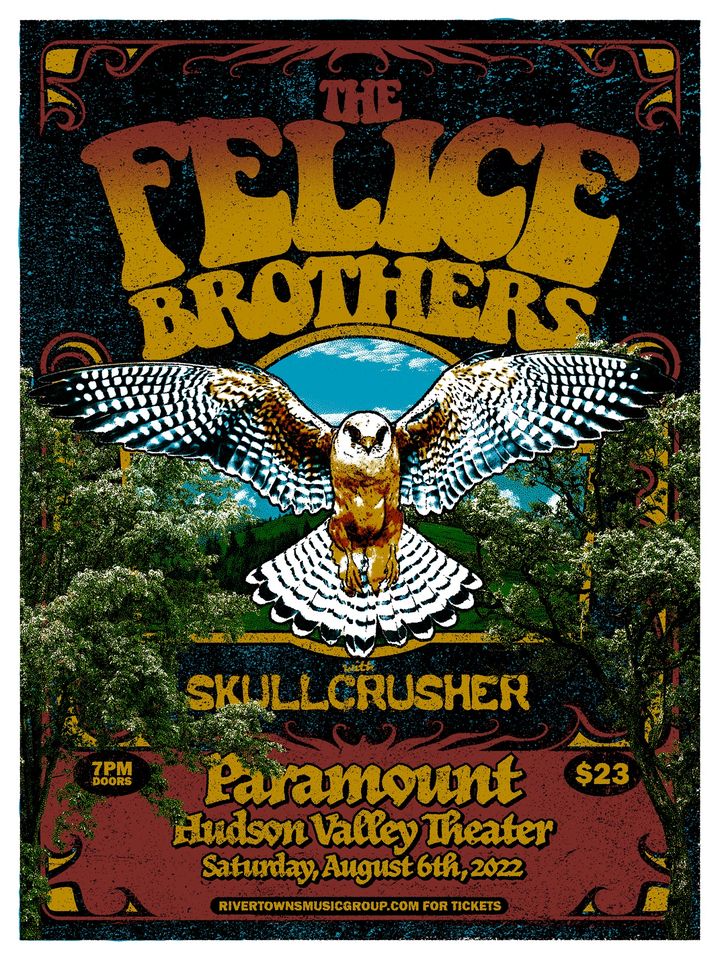 The Felice Brothers with Skullcrusher

Join us for an exciting evening of indie music on Saturday, August 6! Catch internationally-touring, folk-rock legends the Felice Brothers and singer/songwriter Skullcrusher as they take the Paramount stage for the first time. Local heroes Dan Zlotnick Band and a special performance from the School of Rock Briarcliff Manor will kick off the night.
“The Felice Brothers, who began as New York City buskers, came to prominence during the late-Aughts folk-Americana boom ushered in by groups like the Avett Brothers and Mumford & Sons. But unlike many of their contemporaries, the band has, from its inception, prioritized self-definition over success, intentionally steering their career away from big-time opportunities… ‘All your favorite bands want to be in the Felice Brothers,’ Deer Tick guitarist Ian O’Neil recently wrote. ‘It’s time that the band get the credit that they and their music deserves.’” – Rolling Stone.
“Skullcrusher is not a metal band, or an industrial band, or whatever other abrasive genre you’re probably thinking of. It’s the solo project of LA singer-songwriter Helen Ballentine, a new Secretly Canadian signee who records quietly-pretty guitar music in the spirit of the times. Pillowy indie ballads under the name Skullcrusher…It’s like the next logical progression from Phoebe Bridgers…” – Stereogum
Headliners the Felice Brothers have toured across the United States and Europe for over a decade, playing at festivals such as Bonnaroo, Outside Lands, Newport Folk, and England’s End of the Road. They’re down-to-earth road warriors whose talent is matched only by their humility.
Real-life brothers Ian (guitar and lead vocals) and James Felice (multi-instrumentalist and vocals), hail from the Catskills, N.Y., where their early songs echoed off subway walls and kept company with travelers and vagrants. Their current lineup, with the addition of bassist and inaugural female Felice member Jesske Hume (Conor Oberst, Jade Bird) and drummer Will Lawrence (also a singer/songwriter) as their rhythm section, promises to be the best yet.
Helen Ballentine – aka Skullcrusher – has spent a lifetime understanding that she looks neither tough nor intense. With wispy blond hair and a delicate frame, people usually assume she’s sweet, polite, smart, maybe even meek. Ballentine laughs when she recounts being flattened by a soccer ball in fifth grade or the family friends recently tickled by her band name, Skullcrusher. How could someone so slight and soft, they wondered, wield something so heavy and aggressive? Her stinging songwriting belies any fragility of appearance.
Ballentine grew up in Tarrytown, N.Y. After graduating from Hackley in 2013, she moved to LA where she studied at USC and then dove into her musical career. Performing under the name Skullcrusher, Ballentine will spend much of the summer playing shows and festivals across the United States and United Kingdom.
As the winner of River Towns Music Group’s inaugural Battle of the Bands, Yorktown’s own Dan Zlotnick Band will take the stage before Skullcrusher. Before Dan’s set, the talented House Band from School of Rock Briarcliff Manor will show the audience that grownups aren’t the only ones who rock. This is one show with deep New York roots that you won’t want to miss!
Mask wearing is optional, but encouraged other than when eating or drinking.